18 ME patients, compared with 8 healthy controls

In this preliminary paper, I use the term ME to include Myalgic Encephalomyelitis, Chronic Fatigue Syndrome and Fibromyalgia.  These three conditions are not separate diseases but are different manifestations of the same clinical syndrome.

At the present time, I am unaware of any reliable laboratory test that can be used to diagnose ME.

Nevertheless, although by no means diagnostic, my experiments with Live Blood Microscopy have led me to the tentative conclusion that neutrophils, when observed in the living state, show diminished vitality in ME patients as compared with healthy controls.

A tiny drop of blood from a finger prick is viewed immediately, in its living state, by both practitioner and patient, under a high powered microscope, at a magnification of x5000.

The resultant moving picture is recorded at 25 frames per second onto a sophisticated video editing programme (Avid) as a permanent record for further study.

My early observations seemed to show that the neutrophils in ME sufferers were not only smaller than in healthy controls, but also slower moving.

I later observed that neutrophils in ME sufferers, as well as being small and slow, could also be large and slow or small and fast.

It seemed reasonable to me to combine their speed and size into a single parameter in order, at least partially, to cancel out these discrepancies and to arrive at a measure of neutrophil vitality..

When viewed under the microscope in its living state, the human neutrophil moves through the plasma, changing shape as it goes.  It also frequently changes direction, often reversing its direction.  It is therefore difficult to measure its size.

This difficulty is overcome by selecting a single frame from the video and using a special computer programme (ImageJ) to draw round the circumference of the neutrophil.  The programme then automatically measures, quite accurately, the area occupied by the neutrophil in square microns.  A total of 5 measurements are made and averaged.  The parameter: Nsµ  (neutrophil square micron count) is thus established. 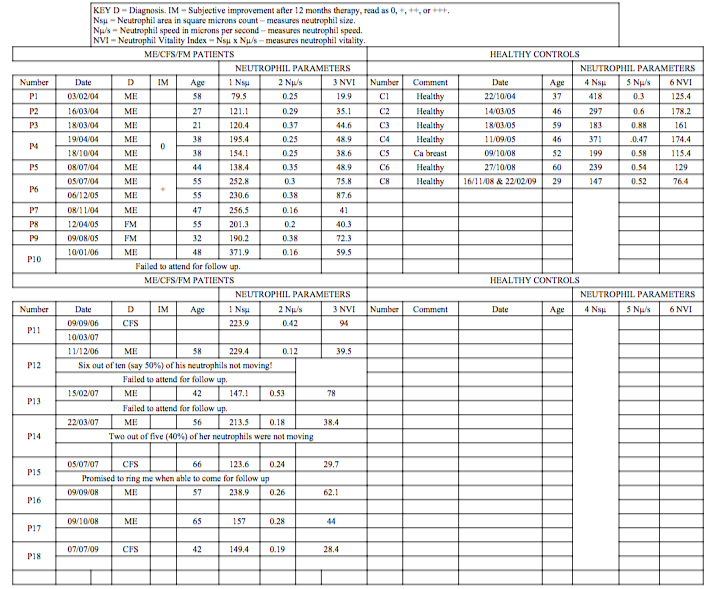 Compare columns 3 and 6.  With one exception (C8), the NVI is less than 100 in ME patients and greater than 100 in healthy controls.

I have developed a clinical regime that is having a therapeutic effect on the majority (about 75%) of the ME patients that consult me.

If confirmed, this would help to validate the diagnosis, provide considerable encouragement to both patient and physician and help to reinforce the therapeutic counselling that has been given.

To date, sample numbers are too small to be conclusive, but the results are encouraging and I intend to continue my work in this field.

A video from Overton Studios Trust.  This video demonstrates the earlier stages of my enquiries into Live Blood Microscopy.